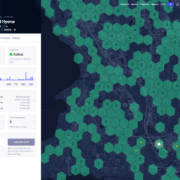 I mine cryptocurrency with a Helium Miner